The last of the famous stones set in the Imperial State Crown, St. Edward's Sapphire is another of England's treasures that somehow escaped the Cromwell destruction of 1649. This rose-cut blue sapphire crowns the uppermost cross pattee (Maltese cross) in the State Crown. According to legend, Edward the Confessor, King of England from 1043 to 1066 AD, wore the sapphire as a ring until he gave it to a beggar along the road in Essex during the dedication of a church called Havering.

The king, enthralled with the festivities surrounding the new church's dedication ceremonies, stopped off to join in the celebration. During the procession, a "fair old man" requested alms of the king, who slid the only thing of value he carried off of his finger and gladly bestowed the sapphire ring to the old man, who thanked him and walked away.

Some years later, two pilgrims from England lost their way on a tour of the holy land. In great despair over being at the mercy of the wild animals of the night, they nearly gave up hope of rescue when at once they spotted coming toward them a company of men dressed in white, carrying two lights.

From behind them emerged a wizened man. They drew near to the company of men, intending to follow them, and as they approached the old man asked them where they were from and where they were heading.

Upon hearing the news that they were lost pilgrims from England, the old man comforted them and led them into a city where they were invited to dine with a group of men celebrating with a feast. After a peaceful night's rest, the kind old man led them back to the road that would take them home.

Just before taking his leave, he stretched out his hand and gave them the king's sapphire ring, saying "I am John the Evangelist, and say ye unto Edward your king that I greet him right well, by the token that he gave to me this ring with his own hands at the hallowing of my church, which ring ye shall deliver to him again. And say ye to him that he dispose his goods, for within six months he shall be in the joy of heaven with me, where he shall have his reward for his chastity and for his good living. And dread ye not, for ye shall speed right well in your journey, and ye shall come home in short time safe and sound."

Upon their sure and swift return to England, the pilgrims delivered the message and the ring to the King, reporting all that St. John the Evangelist had told them. Six months later, on January 5, 1066, King Edward the Confessor died of natural causes and was buried in the chapel he established, Westminster Abbey. 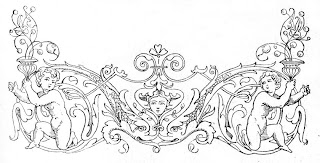