In 1861, following Prince Albert’s death, jewelry inspired by the hopeful notions of the Romantic Era gave way to pragmatic authoritarian rules and regulations about everything, including jewelry.

With the heavier social customs came heavier jewelry, as well as the institution of day and night jewelry. It was frowned upon to be seen during the day with glittery, ostentatious jewelry. The once frilly and colorful designs of the early Victorian years were replaced with subtler, weighty designs made from onyx, black glass, and jet (a form of fossilized driftwood).

Colored stones were strictly taboo, so colorless diamonds, found in abundance in Africa in 1867, fast became the stone of choice for evening wear. Though a little more flash was tolerated for night wear, designers began to draw their inspiration from Gothic, Etruscan, and ancient Italian architecture. The result: Darker, hefty pieces, such as the mourning brooch shown below.


During the ten years following Albert's death, Victoria remained in seclusion, traveling privately between Balmoral and Windsor Castle. She entered public view only a handful of times during those years; first for the unveiling of a statue of Albert in 1863, second for a public ride through the streets of London in 1864, and finally, reluctantly, for the Opening of Parliament in 1866. She became fixated on death. It was a bleak time for fashion, with England’s fashion trendsetter remaining in deep mourning for nearly a decade.

This fascination with death and the macabre inspired a new fashion which we now call antique jewelry. Prior to Albert’s death, the code dictated six months of deep mourning and another six months of half morning. Upon the Prince’s death, Queen Victoria restricted her household to full mourning for one year and half mourning for one year. Deep mourning customs dictated scant jewelry and black and grey dresses made from crepe.

To the relief of many, on March 10, 1863, Queen Victoria declared an end to the mourning period for England, making the wedding of her son Prince Bertie to the Princess Alexandra the most colorful spectacle seen on English soil for two years. Despite the Queen's release of the public, she remained heavily in mourning, purveying the ceremony from a private box shrouded in what Helen Rappaport terms her “widows weeds.” She also refused to lift the ban of half-mourning from the female members of the Household. Her daughters wore dresses of mauve, lilac, and grey to the wedding.

If Princess Alexandra hadn’t come as “a breath of fresh air to blow away the mid-century cobwebs,” the jewelry industry may have collapsed. {8} Thankfully, the jubilant wedding gave the jewelry industry permission to look to the new Princess for inspiration. Although white diamonds and pearls continued to dominate the jewelry scene into the early 1900s, designers began to introduce a little more romance and whimsy into their designs over the following decades. 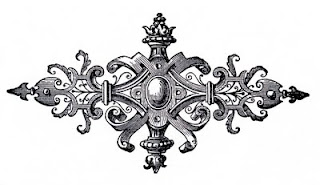