In the Tower of London, nestled in the Maltese cross at the apex of the elegant and beautiful Queen Mother's Crown, the Koh-i-Nur diamond shines regally. After a long and tumultuous history, the large and somewhat unattractive diamond deserves this quiet repose.

The Koh-i-Nur boasts the longest documented history of all the famous diamonds. Its past is marked by brutal battles, intense bloodshed, and monumental struggles for power, likely resulting in the superstitious curse it carries.

It is said that any man who wears the diamond will lose his kingdom or suffer bad luck for all his life. On the other hand, this same diamond is said to hold a blessing of fortune for the woman who wears it.

Since being handed over to the British Empire by the East India Company in 1846, the legendary diamond has served as a crown jewel for only the women of the wise empire of Great Britain. Queens Victoria, Mary, and Queen Elizabeth (the Queen Mother) have all worn it in their coronation crowns during its 166-year respite in the United Kingdom. For fear of the curse, no male British monarch has ever worn the jewel. 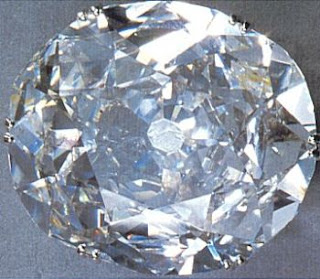 I'm not prepared to admit that the Koh-i-Nur diamond brought any of the English queens good fortune. Yes, the crown remained secure in the hands of the monarchy throughout these past generations. And yes, Queen Victoria lived a very long life, which was considered fortunate for those born in the 19th century.

However, it certainly didn't bring her happiness. Queen Victoria's entire adult life was pocked with loss and grief, both before and after she inherited the fabled diamond. Perhaps certain talismans lose their power when pitted against other forces of ill.

The large and rather dull diamond was purported to have been found in the mines of Golkonda (Golconda) in southern India, specifically in the Kollur mine of the Gunter District. While I have not found definitive evidence to prove its origins, that would put to rest any notion that the Koh-i-Nur and the Syamantaka mani are the same gemstone, since the Kollur mine was not opened until the 12th century.

Like with many very old jewels, conflicting information about the origins and early history of the Koh-i-Nur diamond abounds. It seems that it drifted in and out of the records of antiquity in a misty fog.

Despite its sometimes veiled history, in my next post I've pieced together a rough timeline of the Koh-i-Nur diamond’s early years. I do hope you will find it illuminating!